Scarlett Mellish Wilson Wiki Biography DOB Age Height and Personal Profile Details| Jhalak Dikhla Jaa Contestant –Scarlett Mellish Wilson is a British dancer and model who has taken a place in the hearts of viewers with her brilliant dancing skills. She has worked in many advertisements and Bollywood films.She also worked with Hritik Roshan and Saif Ali Khan in Commercial ads.She had gained popularity with an Item number ‘Bajatey Raho’ in the movie ‘Bajatey Raho’, directed by Shashant A Shah. She  was last seen in an item number ‘Kaddu Katega’  in the Bollywood action- masala film ‘R…RajKumar’,directed by Prabhu Deva.  Apart from this, she also performed in Jazzy B Punjabi music video ‘Cut like a Diamond’. 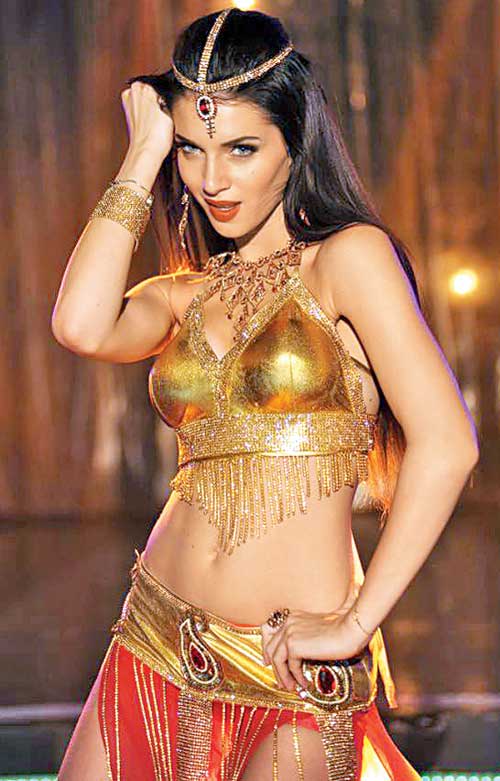 Scarlett Mellish WilsonWiki and Biography Info-She was born on May 9 1988 in Folkestone, UK. She has done her graduation in Arts from Tiffany Theatre College, London. She is highly appreciated by the Indians for her dancing style in ballet and jazz. Before coming into acting, she has started her career with modelling and after that she assisted on choreography for the ‘Chak Dhoom Dhoom’ TV show which was aired on Colors TV.

Scarlett In Shanghai Film-She came into limelight with an item number ’Imported Kamatiya’ in political thriller film ‘Shanghai‘, directed by Dibakar Banerjee. She has played a small but effective role of Tina Rayin this Bollywood film.

Scarlett In South Indian Film Industry-She also danced in number of South Indian films such as ‘Cameraman Gangathio Rambabu’,’Yevadu’,’Chandra’,’Prem Adda’.She was also appeared in a Tamil action comedy movie ‘Jilla’ as a ‘Comeo Appearance’ in 2014.It was Directed by ‘R.T Neason’, one of the famous directors in Tamil film industry.