Sapna Moti Bhavnani Wiki, Biography and Unknown Facts about Hairstylist– Recently MS Dhoni Advertisement featuring Sapna Moti Bhavani getting viral and it is of upcoming World Cup T20 and named as Taiyaari. Meanwhile this advertisement is getting viral all over the internet and especially Star Sports are promoting it much.Sapna is in the advertisement as MS Dhoni’s hair dresser and want him to take that Long hair style look which was at the time of winning the last world cup. We were getting number of requests regarding her profile details and here it is. 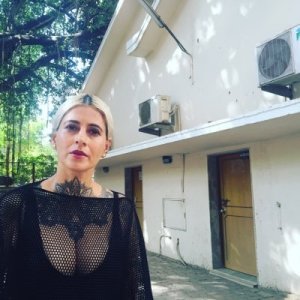 She participated in Bigg Boss season 6 too in 2012 and maintained to get good popularity through the serial too. She was viral when she developed few differences with Salman Khan. Sapna was nominated for eviction for a total of eight times during her stay in the house. She was saved by the public vote seven times.

With this it is pretty much expected that MS Dhoni will be in his long hair looks in the upcoming world cup ? . The Maahi look and it will be viral again in the country.

Share this with your loved ones and Cricket fans too. Comment if you have more information regarding her.