How Much Does A Bunion Surgery Cost

Are you wondering why the side of your big toe hurts every time you try to wear shoes or just walk? Maybe you are suffering from the discomforts caused by a bunion, which is characterized by an inflamed swelling of the small sac filled with fluid on the first joint of your big toe. This is usually taken out by undergoing a medical operation called a bunion surgery. If you are planning to get it, how much does bunion surgery cost then?

Normally, medical clinics based in the United States of America have an average cost of bunion surgery, ranging from $3,500 to $5,000. However, there are some hospitals that charge up to $15,000 for the bunion removal cost, according to The Bunion Doctor.

Apparently, the cost can be influenced by several factors such as the type of bunion surgery the patient has to undergo, the surgeon doing the procedure, the location where the operation will take place and the use of anesthesia.

Generally, a bunion surgery involves an incision that starts on the side or on the topmost portion of the big toe joint and the realignment or removal of the protruding bone and soft tissue. Such procedure is conducted to eliminate the pain and bring back the normal alignment of tissues or ligaments to the joint.

Aside from incisors, the procedure also involves the use of plates, screws or small wires, ensuring that the bones stay in their places. This is one of the major factors that affect the average cost of bunion surgery.

WebMD says that there are more than 100 types of bunion surgeries available, but medical research has not pointed out which type would be the most effective procedure to address your bunion issue. There are even cases when a patient has to undergo more than one operation, but it is not guaranteed that the surgery will completely relieve the pain. Below are some popular types of bunion surgery.

*Arthrodesis is a type of bunion surgery that lets the surgeon remove the affected surface areas of the joint and insert the plates or screws, securely holding the joint until it has fully recovered. 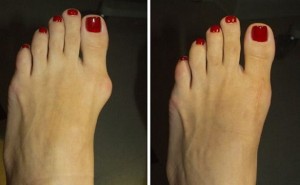 This medical operation is only applicable to patients who have serious arthritis, structural deformities or in cases when initial procedures fail to work properly.

*Bunionectomy or Exostectomy refers to the removal of a portion of the metatarsal head, which is the bulging part of the foot. The typical bunion removal cost is around $3,900.

*Lapidus Procedure is the procedure that fuses the big toe joint.

*Osteotomy involves surgical cuts in the bones and moves them back to its proper position.

*Repair of Ligaments and Tendons basically shortens loose ligaments as well as loosens tight ligaments and tendons, realigning the big toe to its normal place.

*Resection Arthroplasty removes the damaged portions of the joint. This procedure leaves a scar on the foot.

The Surgeon of Your Choice

Another factor that can influence the average cost of bunion surgery is the services of a professional surgeon who will tell you what kind of surgery you need and basically do the medical procedure. Sometimes, doctors who do the job in their private clinics relatively have lesser prices than in the hospitals. It can even go lower or higher, depending on the surgeon’s reputation and skills in the field.

The Location Where the Surgery is Taking Place

As what has been mentioned earlier, there are medical institutions that charge less than $10,000 for a certain bunion surgery, while there are hospitals that ask for higher fees up to $15,000. It is important to know where you want to have the operation to budget your money well.

For instance, if you need to have an exostectomy, it can be performed in an orthopedic clinic that has the proper instruments for the surgery to be completed. Meanwhile, other bunion surgeries may require the assistance of the well-designed equipment and facility of a hospital where it provides a more advanced and innovative medical technology.

Although medical procedures done in clinics are normally cheaper than the hospital’s outpatient surgery, there are times when private medical firms charge more especially when patients chose to have exclusive professional services.

The Use of Anesthesia

Considering that bunion surgery is an open procedure, there is a definitely a great need for anesthesia to conceal the pain that the patient will feel as the operation is going on. Usually, the whole process takes, at least, an hour to finish, depending on what bunion surgery type is being performed.

The charge for this cost is paid to the anesthesiologist for administering the medicine before and after the surgery. According to CostHelper, the price for the anesthesia service, which is a part of the total bunion removal cost, ranges from $500 to $3,500.

The answer to the question, “how much does bunion surgery cost?” would mean very big expenses to shoulder. However, it pays a lot to know if this is covered by your insurance since you can save around 10 to 50 percent of the total expenditures you need to pay.

*Aside from the costs, bunion surgeries may lessen the big toe joint’s flexibility that is a major issue for active individuals who rely so much on the capabilities of their big toe.

*After the surgery, you have to keep your foot away from objects that could cause serious discomforts. As much as possible, wear something that has more space to lessen the pain.

*You also need to remember that bunions may come back after you have undergone the surgery, especially when you still continue to wear high-heeled or narrow footwear.

*It takes six to eight weeks for your foot to get healed from a bunion surgery. But a full recovery will take about four to six months. Following your operation, the surgeon will put a boot or cast, which will protect the foot for the first two weeks. After the given period, you have to go back to your doctor to remove the cast. You will, then, be wearing a brace as a support for your foot as it continues to heal.