Chris Brown is a name that turns heads in the music industry. Breezy is one of the most celebrated hip-hop, pop, Rap and R&B artists portraying unique talent in both vocals as well as dancing styles. His outstanding style of music has carved a notable niche among listeners of all ages.

Chris Brown the Singer: Christopher Maurice Brown started singing way back in his church choir and local talent shows in Tappahannock, Virginia. He released his first single Run it and has been topping the lists in the music industry since then. He has a total of seven studio albums, five mix tapes and one hundred and six singles.

Acting: Chris Brown first got into the acting scene in the year 2007 in the movie “Stomp the Yard” where he played a supporting actor with great dance moves. Breezy has been sighted in quite a number of other movies including but not limited to: “Takers”, “Think like a Man”, “Battle of the Year” among others.

Chris Brown is one of the most inked up artists following the likes of Lil Wayne. It is held that he has over 50 tattoos on him, with some holding a sentimental value and others just for the fun of it. He got his first tattoo at 13 and his latest at the time of this writing was gotten on June 6th 2016. Generally, Brown’s tattoo seems to depict retaliation and brutality.

The most outstanding tattoo on his chest is the wings tattoo that was finished in 2010. The wings are taken to be a representation of his religious beliefs; angel wings. His love and passion for music is shown in his “symphonic love” tattoo that cuts across his chest accompanied by the two roses at the ends of the words. 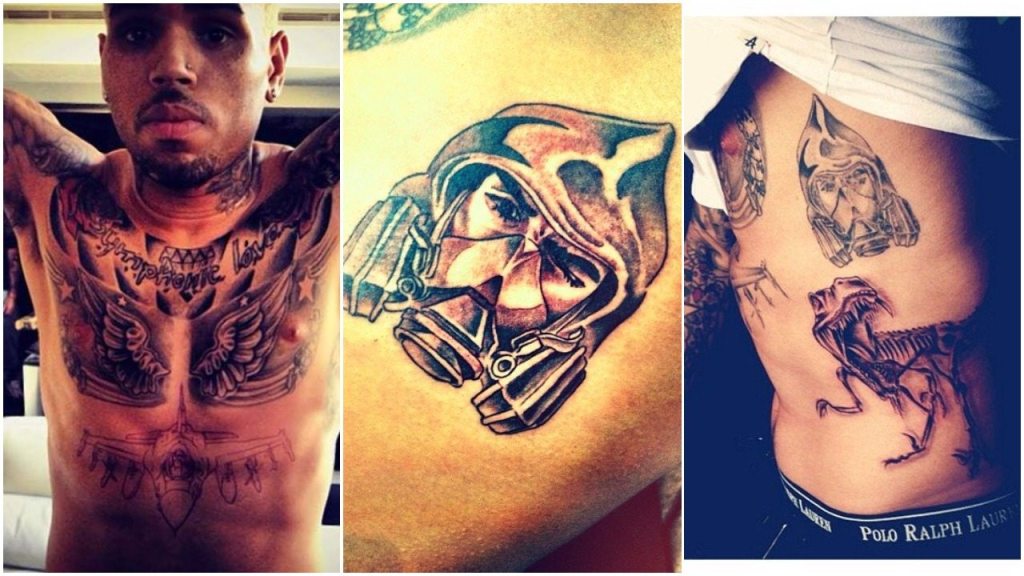 Below his chest, right under the angel wings is a tattoo of an F16 fighter jet which was crafted by artist John Petro. He revealed the tatt on Instagram accompanied by the caption- “fly”.  Right under his armpit is a picture of himself wearing a respiratory mask and a hood. He revealed the tattoo on July 2012 via twitter with the caption- “The Bandit”. On July 17, 2013, Breezy revealed a new giant dinosaur skeleon tatt just below his left rib cage. The dino is believed to be the infamous Tyrannosaurus Rex, which prides itself as the king of all dinos.

His arms feature more tattoo than any other part of his body and it hold his first ever tattoo. At the age of 13, Brown got a Jesus tattoo against his mother’s wish. The Jesus tattoo is surrounded by music notes and Chris explains it; “My first tattoo was a Jesus with musical notes. Basically signifying that God gave me the gift to sing.”

Another very obvious tattoo on his arm is the FAME tattoo, the title of his Grammy winning album which is acronym for “Forgive All My Enemies.” He also has his mom’s name Joyce tattooed on his sleeves. 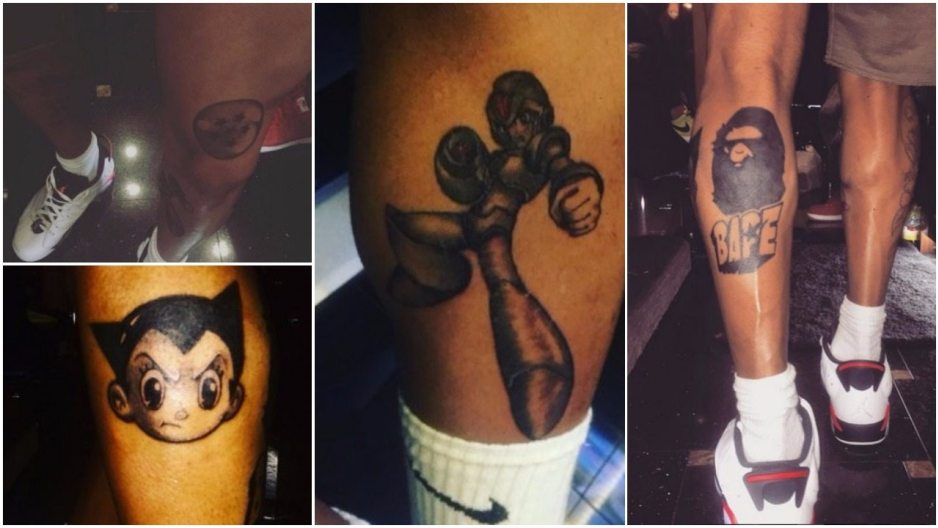 His love for anime/manga got him to get a couple of cartoonish tattoos. He had a Dragon Ball Z tattoo inked on his leg; a medium-sized ball with five stars, Astro Boy and Mega Man tattoos. 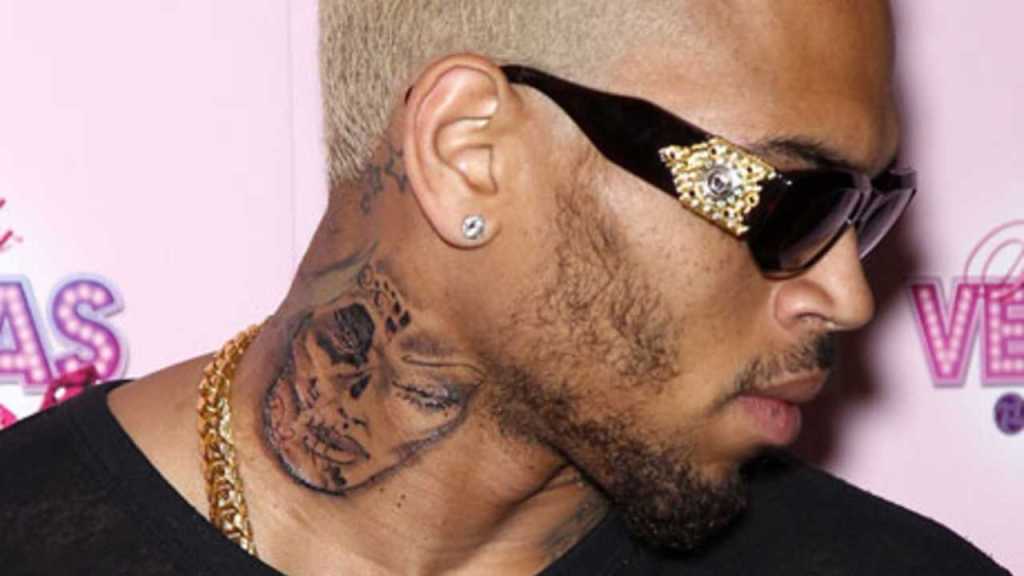 His neck bears quite a number of tattoos starting with the very famous stars which he and Rihanna, his ex-girlfriend got together and the larger one just beside the stars which sparked controversies for resembling the face of a battered woman suspected to be Rihanna. However, Breezy has confronted this speculation, saying that the tatt is a symbol representing the “Dios de los Muertos”, a Mexican holiday also known as the Day of the Dead and has no ties with his ex. The Mexicans hold this holiday in honor of all those who have lost their lives. 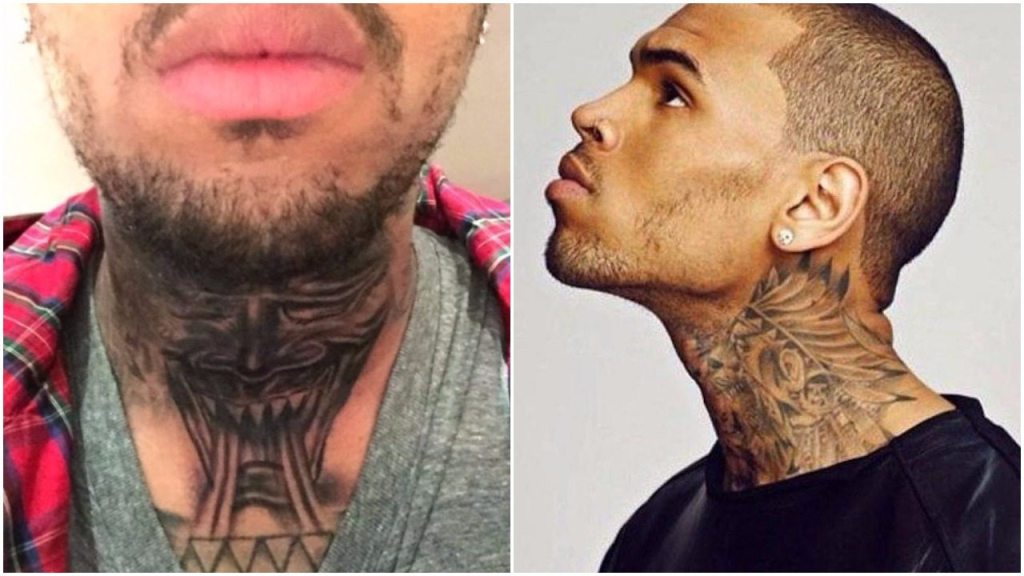 Chris had a lion tattoo on his neck in 2012 which he said meant Christ and freedom, two years later in 2014, he covered it up with a creepy devilish face complete with fangs and what appears to be venom coming out of its mouth. The left side of his neck shows a wolf Indian chief tatt. 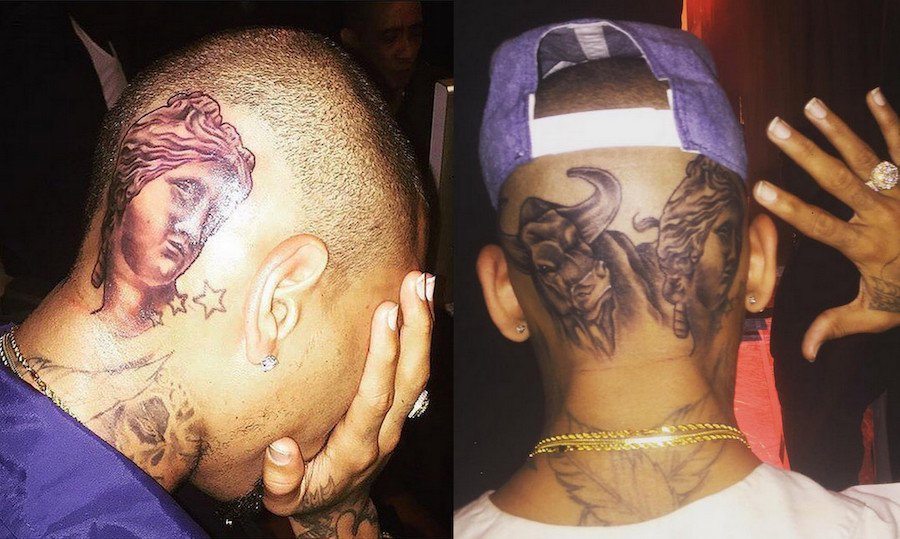 Chris Brown’s love for tattoo is apparently getting bigger and larger than his skin can take. The singer in 2015 had to shave his head to make way for a new inking. In August 2015, he revealed a new ink at the back of his head which depicts the famous Greek god for love and beauty, Aphrodite. Few weeks later, Brown revealed yet another one, an angry bull, this time at the center of his skull.

He explained the meaning of the tattoos on Instagram saying “Venus De Milo; the Greek Goddess of Love. Bull; represents the Taurus that I am.Strategically placed on the left side of my head in protection of my heart for the Love of my Goddess… ROYALTY is everything and as man, we protect that with everything!”

Chris Brown’s back is the less inked part of his body but we bet it won’t stay that way for long, seeing the Beautiful People crooner is running out of skin. Brown got his first back tattoo in 2011, it was a smiley face with an oversize grin, kind of like the face of a skull. Fans have related the tattoo to his anger problems which became evident in his 2009 relationship saga with Rihanna, Breezy has said nothing about this one.

Up next was a cross feather tattoo right above the wicked grin smiley face. It appears to be the reverse of the danger sign which features crossed bones below the skull face; Breezy’s own sign of “safety”. Maybe? 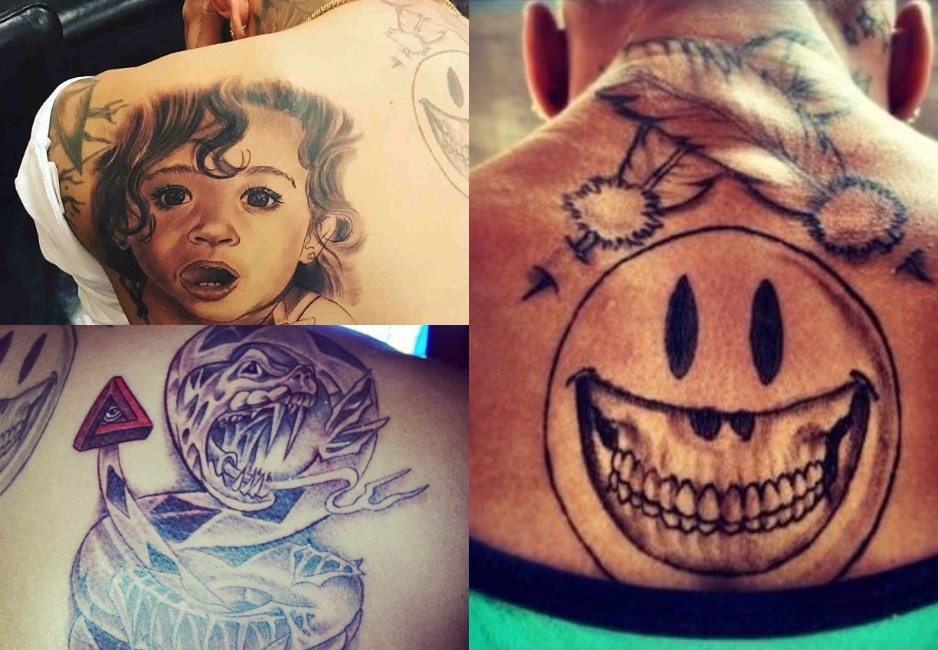 The most controversial yet, of Breezy’s back tatt is the giant snake with a triangle and the all seeing eye at the tail. The snake is said to represent his birth year 1989 – which according to the Chinese Zodiac is The Year of the Snake. As if the fierce looking snake wasn’t questionable enough, Breezy added the triangle with the all seeing eye to the snake’s tail, a symbol that represents the Illuminati, a secret cult that Brown has has been linked with.

The most recent of his back tattoo is the face of his 2-year-old daughter, Royalty. He got the tatt inked to mark her 2 year old birthday.

Chris Brown in 2015 purchased a 8,317 sq. ft. pad in San Fernando Valley Tarzana, Los Angeles for the price of $4.35 million. The house which sits on a three-quarter acre includes 6 bedrooms, 8 bathrooms, and a sound proof home theater with 14 recliners for loud parties. 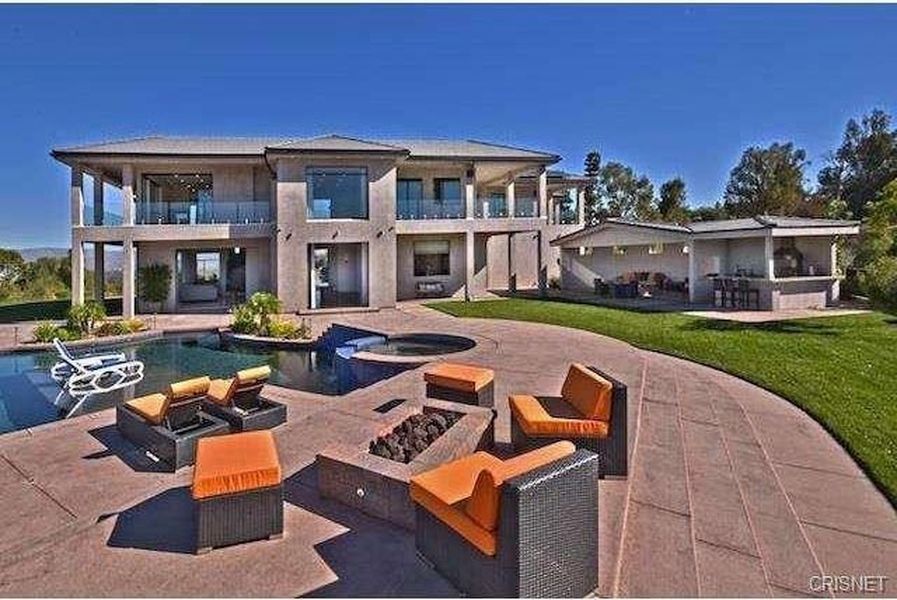 The exteriors feature an outdoor kitchen, a 10 car motor court, 3 fire pits and of course a saltwater pool. The grounds are complimented with an expansive lawn hosting a waterfall. 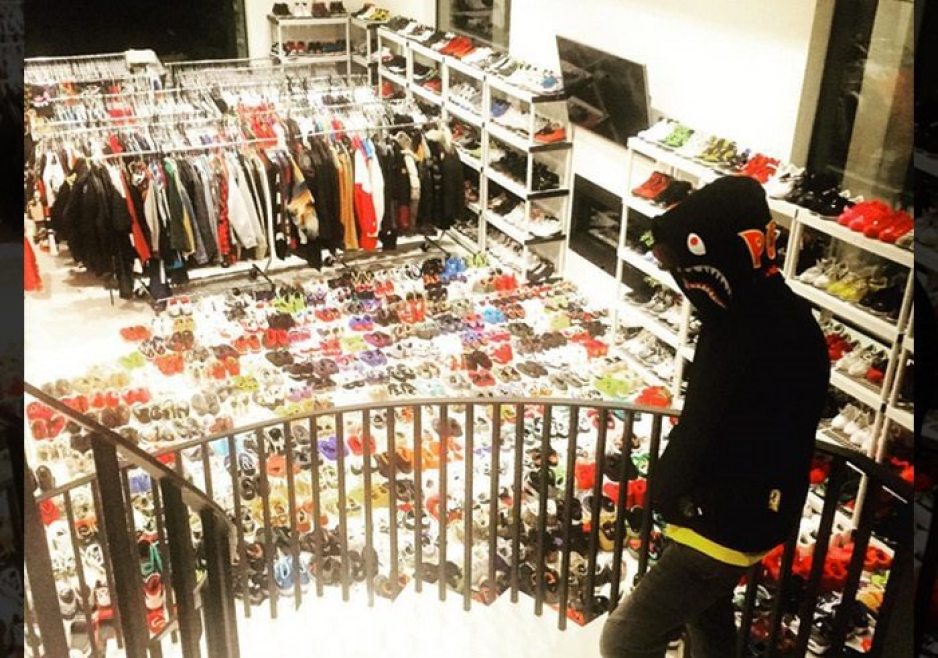 Breezy turned one of the 6 bedrooms to his closet, and it still didn’t seem to be enough room for all his clothes and shoes.

In addition to gladly offering up his body to be used as a drawing board, another thing Brown has a penchant for is cars. Simply put, Chris Brown is one of those celebrity car enthusiasts. The Deuces singer has been spotted with over a dozen super cars since his rise to fame. His favorite is unsurprisingly the Lamborghini. Here’s a look at some of his latest car collections.

The Superveloce (SV) as the name implies is a superfast luxury vehicle with the ability to reach the 60 MPH in 2.8 seconds and a top speed of 217 MPH. The loyal singer reportedly purchased this in September 2015 for at least $400,000.

In addition to this, Breezy also owns another Lambo Aventador which he bought for $397,000. He customized it to a baby blue and black theme.

This is yet another 2016 addition to Brown’s ever growing fleet of super cars. Maybe a replacement to the all-black version of the same car which he crashed sometime ago in LA. This one is from Russian aftermarket tuning company, TopCar. The company is famed for customizing European luxury vehicles. The Porsche features a Stinger GTR body kit and thanks to TopCar’s fixes to its 3.8-liter six-cylinder engine, it can move to 60mph before 3 seconds. This new toy set Breezy back around $280,000.

The Range Rover deluxe edition costs about $93,000 and Chris Brown has definitely added a few changes; he had JC Customz adorn his rims with a brushed gold finish. It has a V8 engine and accelerates to 60 mph in about 9.2 seconds.

In addition to all these, Chris Brown owns a host of other cars including two other Lamborghinis; a black one and another with a customised jet fighter look. Others include a Dodge Viper, a Rolls Royce, a Porsche Panamera, a Bugatti Veyron, and a vintage Chevy Impala with retractable roof and high end leather seats.

Interestingly, Breezy is already introducing his two year old daughter, Royalty to the fine life of luxury living. Breezy makes customized miniaturized versions of his luxury cars for his baby and they reportedly cost $2,500 each.