Polythene Bags,do we really need those ?

It was around 6:00 in the evening when I went to the departmental store in my locality.As usual there was a lot of noise and crowd in the market.Many customers were waiting for there turn to get their desired products.Each of them for the products they had bought were demanding a polythene bag.And the shopkeeper as usual was providing them with those plastic bags.

Each time the shopkeeper provided them with polythene bags,he had a weird expression and a sense of disturbance on his face.It was not because he had to spend some extra pennies for free.I noticed his expression and talked to that shopkeeper as i knew him personally.People who had come to that store were engineers,doctors and people at reputed positions because it was a posh colony.But none of them bothered about the use of polythene bags.Then at that departmental store came a guy who would be around 21.As usual he also ordered his desired products and shopkeeper provided with polythene bag.But that Guy refused saying “no need of this.I will carry these things in my hand as i live in the same locality”.Those words brought a big smile on the shopkeeper’s face.He said” proud of you son”.Now some people would be wondering what’s new and special in that ?We have one or two states in India where Polythene bags are totally banned.But if they can do this,why not entire India. 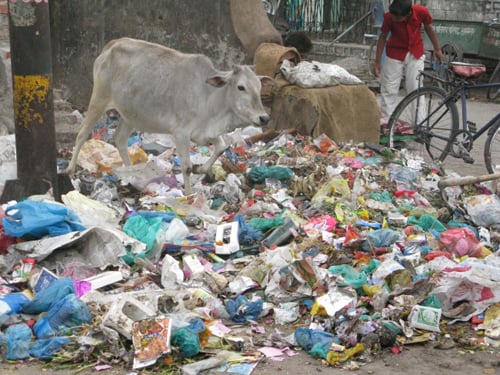 Cows are considered Sacred animals in India and some give them the title of mother.But aren’t we killing our mother by our own hands by this.Polythene accounts for one of the main reasons cows get ill and weak and their death.This is not an article about social studies or class 9 environment studies where i am going to discuss its disadvantages.Main reason is to make sure those so called educated people “WAKE UP ” and feel their responsibility.India is one of the leader in production of Engineers and doctors.Scientists of India are doing a wonderful job,but apart from that,it becomes responsibility of common people and other educated people to make sure we handle these harmful bags carefully and avoid them.We can opt for better alternatives and minimise their use.Must play and contribute your part in this issue and give your valuable suggestions.