Hemant Bhosle Wiki Biography| Asha Bhosle’s Son Died due to Cancer– Legendary singer Asha Bhosle’s younger son and music composer Hemant breathed his last on September 28. He had been battling with cancer for long and was in Scotland in his last days. He is the eldest son of Asha Bhosle and had been living in Scotland. He has composed music for several Hindi and Marathi films. Asha Bhosle was in Singapore for an event when she received the tragic news. She was preparing to leave for Mumbai to attend the birthday party of her sister and legendary playback singer Lata Mangeshkar.However, the party was called off following the sad news. This is the second tragedy that has struck Bhosle family. In 2012, Asha Bhosle daughter and journalist Varsha committed suicide by shooting herself.Varsha was suffering from depression and was under psychiatric treatment for the same. Asha Bhosle now lives with her youngest son Anand, who she calls Nandu, at a complex in Lower Parel. 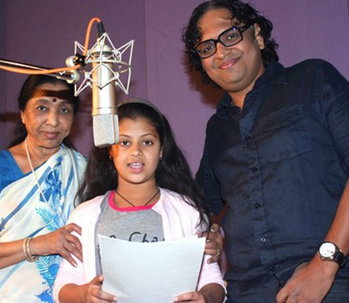 Hemant Bhosle Wiki and Biography Info– Hemant Bhosle was a music composer and composed music for over 15 Hindi films over two decades from 1977. He had also composed several evergreen tracks like ‘Sharad Sunder’ and ‘Yeu Kashi Priya’ in which his mother lend her voice.

News- It is also said that Hemant and his mother Asha Bhosle shared a strained relationship following Hemant’s bitter relationship with his wife Sajidah alias Rama Bhosle. The couple sought divorce on the ground of cruelty and Hemant was ordered by court to pay 25,000 per month as interim maintenance to his divorced wife.